Review: A Pigeon Sat on a Branch …

If the objective of art is to make one think, Roy Andersson’s latest trip into the dream world is a thought provoker to be reckoned with.

Holger Andersson plays Jonathan and Nils Westblom plays Sam, two traveling salesman hawking novelties to make people laugh and have fun. What could be wrong with that? A lot. It turns out that not only are sales down, but the two are plunged into a purgatory of failure over mankind’s inability to appreciate what they have to sell. 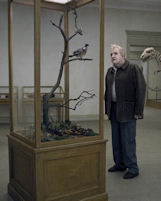 Andersson has not only made a half dozen highly acclaimed films, he has also made dozens of TV commercials. His commercials for Trygge Hansa Insurance are probably the most apt.

After all, crazy stuff happens and it happens mostly when you least expect it. Then there are the commercials for the Loto, featuring the reading of numbers over radio and TV, except that no one gets the numbers because there is always some interruption, failure or something else in the way. “I could’a been a contendah!”

The Social Democratic Party? You know where that one is going…

Although he says this is the only film of his trilogy (“The Living Trilogy) that he has made while having to make commercials at the same time. Even so, his commercials are available on You Tube online (for non-Swedish speakers, some translation is necessary) and are an excellent primer to what is in store in “Pigeon.”

There are two things that make this film great and his commercials hilarious. The first is the film maker’s dedication to making the difficult, simple. The second is his unabashed honesty and enthusiasm in taking the little things in life, good and bad (OK, mostly bad) and exposing them to the unforgiving petard of humor.

Enter Jonathan and Sam, his Don Quixote and Sancho Panza, his Stan Laurel and Oliver Hardy. He develops the same character development in his commercials, using the same actors throughout a series, as he does weaving Jon and Sam in and out of the movie. Every time we see them Andersson is taking them another step further into a swamp of black humor. In the beginning they are losers, by the end they are living in the depths of hell on earth and neither they nor we know how we got there.

Viktor Gyllenberg, in the part of Swedish King Charles XII, also comes and goes. As his endless corps of soldiers marches outside the tavern, on the way to war and on the return, Charles falls in love with the handsome, young bartender. Even the troops develop personalities as they march to war and limp back. The goal is to personalize even the uber-macho Charles, “the last of the Viking Kings” who went out swinging at the tender age of thirty-seven. Speaking of limping, Limping Lotta (Charlotta Larsson) gives away drinks for a kiss to soldiers who haven’t got a dime. Those were the good old days. Or were they?

Sexual harassment, bloodthirsty colonialism, sibling greed and several other sins are dispatched in due time. But not without a good natured attempt at turning the collective audience brain into Utz pretzels. Then that is the point. It surely does no good to make war on the rational and evil with a film that is logical and serious. Better to show that it can be done in the most simplistic, laconic, trivial way and yet across the most powerful picture.