Under Review: ‘Born to be Wild 3D’ 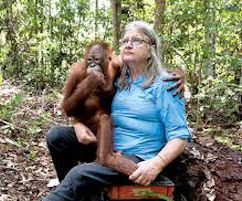 There’s no one on the planet — no matter the gender, age, disability, sexual preference or ethnic origin — who will not supremely appreciate this warm-hearted film telling the story of two camps, one in Borneo and the other in Kenya, for orphaned animals.

Adam Poynter, IJM senior writer, wrote a great preview of “Born to be Wild 3D” with six clips that wonderfully summarized this goodwill story of two women on separate continents who use their vast knowledge of biology and their innate curiosity and compassion to create havens for animals who have lost their mothers.

Sheldrick developed her skills while working on the Kenyan nature preserve that her husband helped found. In 1977, after 26 years of marriage, Sheldrick’s husband died. In her loneliness and grief, she dedicated herself to working with abandoned wild animal offspring, in memory of her husband’s life work preserving natural habitats.

In their wisdom, both women prepare their infants to live on their own. The first step is to comfort them after the trauma of losing their mothers. The second step is to replicate the early nurturing the animals would have received from their mothers. Their caretakers recognize that this early attention creates self-confidence, much needed if the critters are ever going to survive in the wild.

Men sleep with blanketed individual baby elephants in Kenya and women cuddle little orangutans as they sing them to sleep with lullabies in Borneo.

Galdikas says that she views the tropical rainforest as an Eden. Man left it but the orangutans stayed. They remain living there, playful and happy. She has dedicated her life to protecting and preserving this Eden in Borneo.

“Born to be Wild” is a cinematic extravaganza on the interdependence and interconnection between people and animals. Shown on IMAX screens, the viewer is able to enter the beautiful habitat of these vulnerable animals and cheer them on as they are returned to the wild and the welcoming elders of their species. Narrated with the rich, comforting voice of Morgan Freeman, it is a positive story of environmental intervention done correctly.