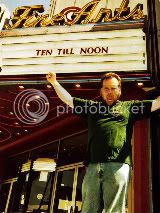 I have a feeling that most of the people who come to this site have at one time in their life dreamed of actually making their own movie.

You hear Kevin Smith’s incredibly unlikely tale and tell yourself, “I could do that.” You could max out the credit cards, call in a few favors and make your film. The film would be brilliant, of course, and once it played at Sundance, a bidding war would ensue (preferably involving a Weinstein) and your career as a movie director would begin in earnest.

However, as shown in the fascinating documentary “Official Rejection,” making the movie itself might just be the easiest part of the equation for a true independent film maker.

Once an independent movie has been made and edited, that movie’s team (producers, directors, writers, etc.) inevitably will start looking for a film festival to play it. And while the first thought might be to just throw the movie on a DVD and mail it off to every one of the film festivals in existence, “Official Rejection” does a fantastic job of explaining why the process is far more difficult than that.

For one thing there is a cost associated with submitting a movie to a festival — regardless of whether you ultimately are accepted or not. There also is a process of putting together a very specific package for the festival (which adds to the cost). And even with these costs, there’s no proof that anyone from the festival will actually sit down and watch your entire movie.

Also, there is the fact that even if you do buck the odds and get accepted to a festival, you then have to decide whether you actually should play that festival. Pick one festival and then watch as another drops you, as they only want to play the “premiere” of a movie. Pick a smaller film festival and lose a chance at Sundance, but wait around for Sundance and lose out on the smaller festivals for having a movie that is “too old.”

From left, Scott Storm and Chris Gore on a film panel in "Official Rejection."

“Official Rejection” does a great job of explaining the process as it follows a group of filmmakers who are taking a movie they made, called “Ten ’til Noon,” on the film festival circuit. The movie explores the process of submitting movies to festivals as well as what film makers go through during the festival itself (this experience varies wildly from festival to festival).

The documentary also explains the difficulties — financially and otherwise — that film makers endure while taking their movie on the road. Many film makers end up spending more on airfare, taxis, hotels, food, etc., while promoting the movie than they did on making the movie itself.

“Official Rejection” also does a terrific job of explaining how much the “indie” film world has changed. During one section, Kevin Smith says that Sundance has changed so much that his movie would no longer be accepted into the festival.

In addition to Smith, “Official Rejection” includes interviews with Bryan Singer, Jenna Fischer, Troy Duffy, Andy Dick and countless others who have made their way through the film festival circuit to varying degrees of success.

It is a worthwhile film for any movie lover, but it is absolutely essential viewing for anyone who is embarking on the movie-making process. Technology has advanced to the point that anyone can make a movie (of some sort) with little cost involved. As “Official Rejection” shows, though, the hardest work sometimes begins after the movie has been made.

“Official Rejection” was released on DVD on Nov. 17. It already has played the film festival circuit.

And click here to see another deleted scene from the movie featuring Jenna Fischer.